Back in 2019—before this whole global pandemic thing happened—we had planned on being in Mexico in mid-June with several friends. With the resort being closed and people generally unwilling to travel (for good reason), I began to think of other ways I could use the vacation time. I had always wanted to check out the other side of the Sierras, and they were close enough to spend a few days there without burning lots of time on travel. After doing some brief research to shore up my whim, I decided on a few activities around Bishop. I loaded the 4Runner, and left the Bay Area around 7am on Thursday, June 11th. 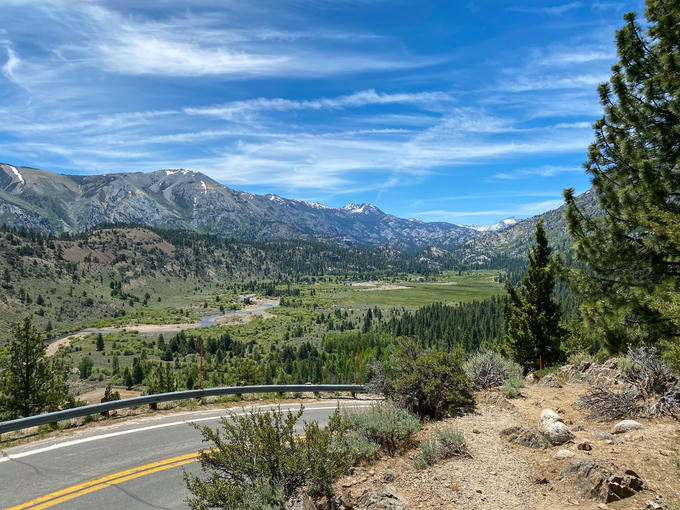 Coming down the Sonora Pass

I didn’t have a solid plan, but I wanted to do a bit of everything: hike, photography, and off-road. There was a nice photograph of the Sierras over the Owens River I wanted to reproduce, and Mount Tom had some hiking and off-reading nearby.

After a gorgeous drive over the Sonora Pass, I arrived in Bishop, filled up on gas, and started exploring along the Owens River between Bishop and Pinecrest looking for interesting compositions. 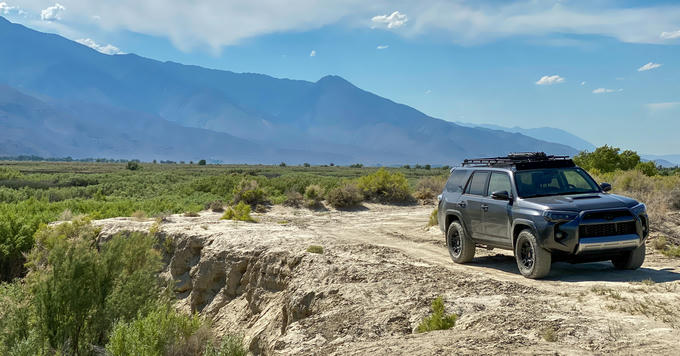 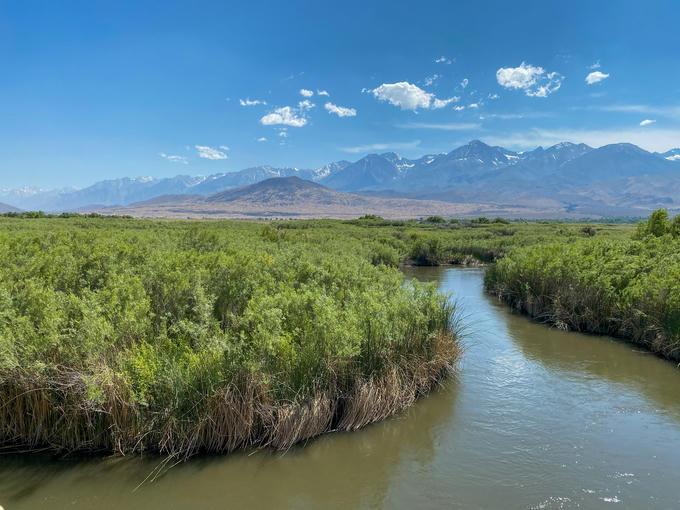 Prime candidate for a sunrise shot

Satisfied with the location I found, I made my way towards the Inyo National Forest to camp along one of the forest roads. Somewhere east of the Ancient Bristlecone Pine Forest I found an old mine overlooking Bishop to make camp for the night. I watched the sun set while eating some ramen and went to bed early. The campsite was about an hour from the location I scouted earlier, and the sun rises early in the summer. 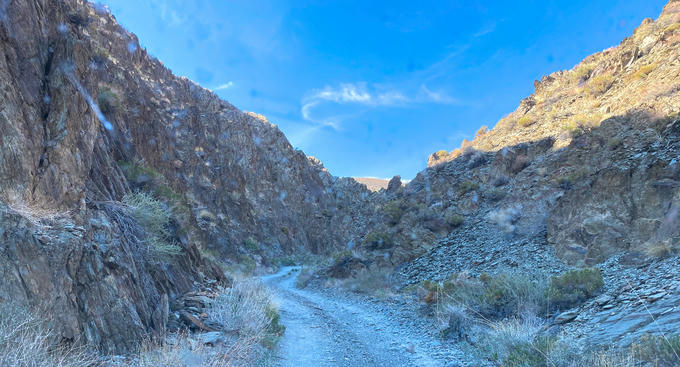 Some light off-roading before bed 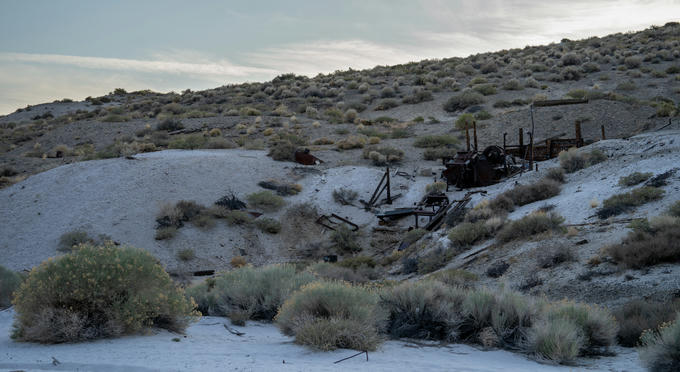 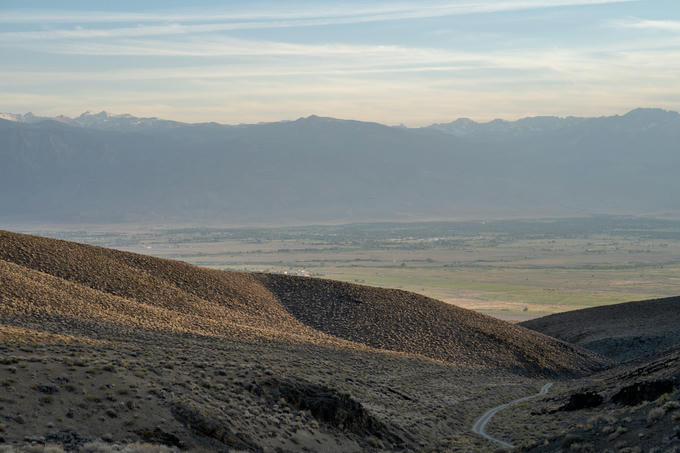 The view of Bishop from camp

I woke up bright and early to break camp and make the hour drive to the location I found yesterday along the river. It took a bit of rushing and panicking, but I made it just in time. 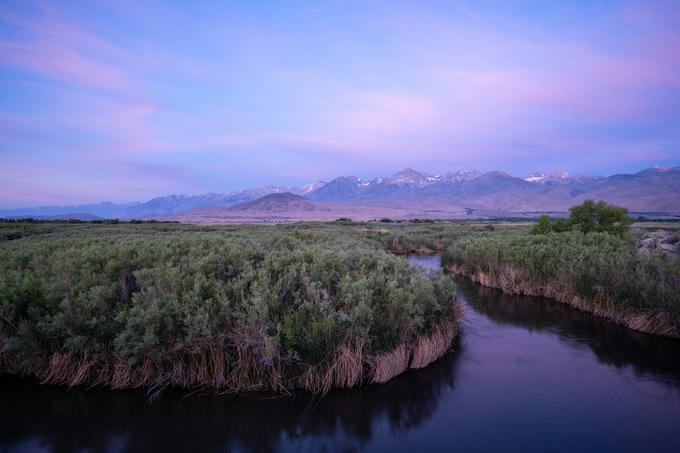 After getting a shot that more or less satisfied, I made some coffee and enjoyed the morning with a book on the river bank. The plan was to hike to Horton Lake in the shadow of Mount Tom, but I was going to get a few hours of relaxation to make up for the lack of sleep.

I was checking my gear before leaving the peaceful riverside when I discovered that my cooler was no longer cool. The smoked salmon that was supposed to be my lunch was not cold to the touch. One quick detour into town for some McNuggets, and I was on my way to the trailhead.

The trailhead was easy to find, but the road to get there was not suitable for cars. I did not need to engage 4-wheel drive, but you will need some ground clearance to get up there. My 4Runner has around 8“ of ground clearance, and it didn’t bottom out once. There isn’t a parking lot either—just some clearings to pull out along the road before it dead-ends at the trail. I probably wouldn’t tote a trailer up there!

I met a nice gentleman camping on the road to the trailhead who was ecstatic about a pair of golden eagles he saw near Grouse Mountain. He explained some areas around Mount Tom and warned me that the lake wasn’t as breathtaking as some of the other views available nearby. I thanked him for the tips, grabbed my pack, and hit the trail at 12:00pm.

A few switchbacks into the trail and the view back towards Grouse Mountain opens up quickly. Shortly after that, you crest a small hill and can see Sonny Boy Mine off to your right. The valley between Mount Tom and Basin Mountain opens up into a beautiful meadow. This was probably the most picturesque part of the hike. The deciduous trees nestled in this valley probably look gorgeous in their fall colors. 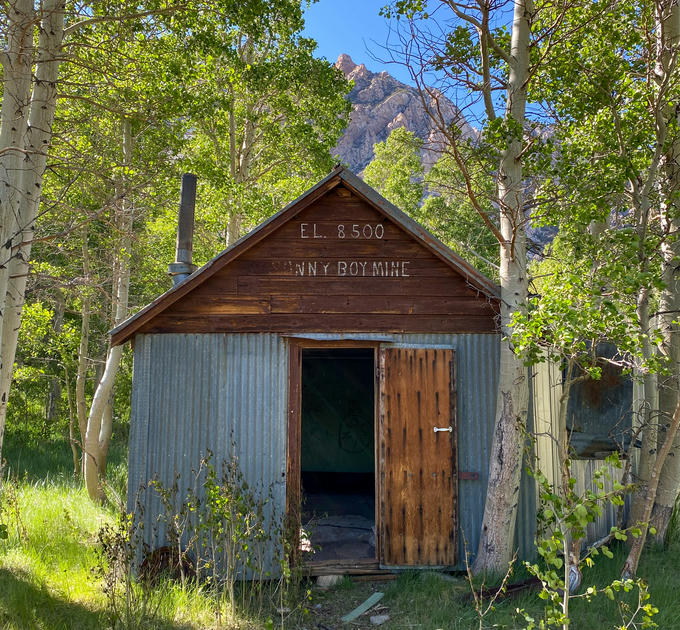 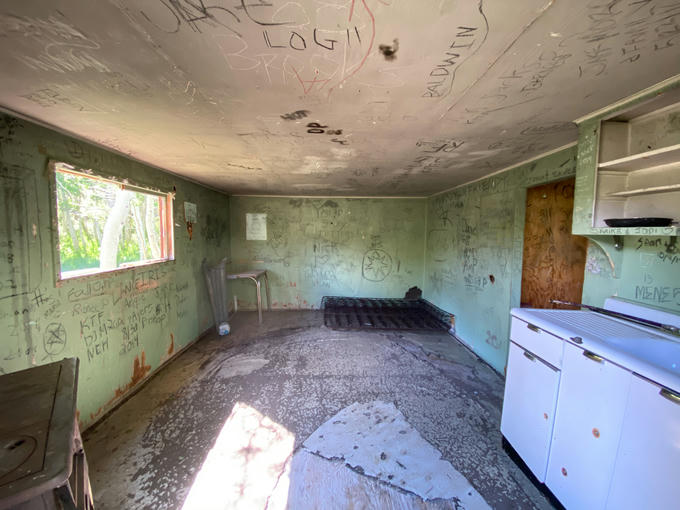 The trail up through the valley is opposite of Horton Creek. The creek was quite active with snowmelt this time of year, and the falls looked nice. Getting over the hill on the far side of the valley sees you at several old miner’s cabins for the defunct Hanging Valley Mine. Just beyond those cabins is Horton Lake. There were several fire pits with metal roasting sticks and chairs set up in the area for backpackers. One of the fire rings even had a cast iron grill. I unpacked my now-cold McNuggets and a book for some reading by the lake shore. 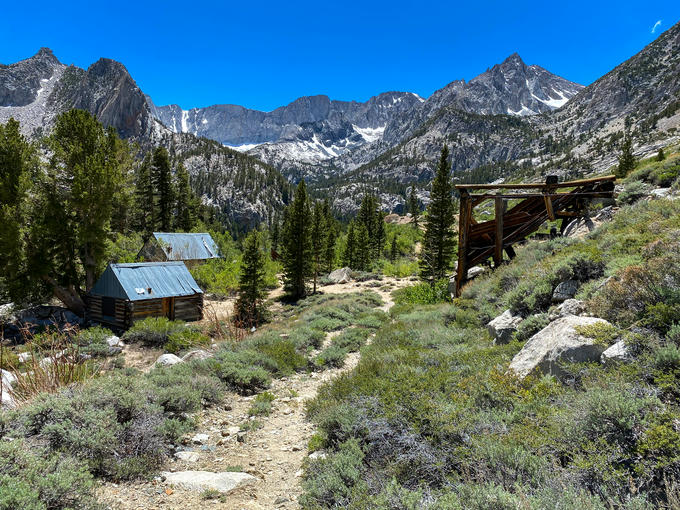 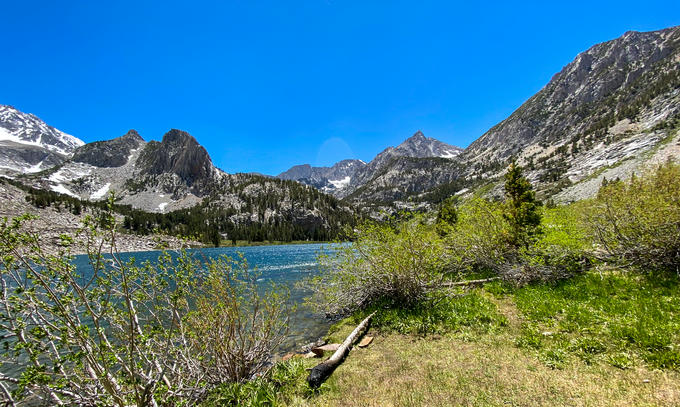 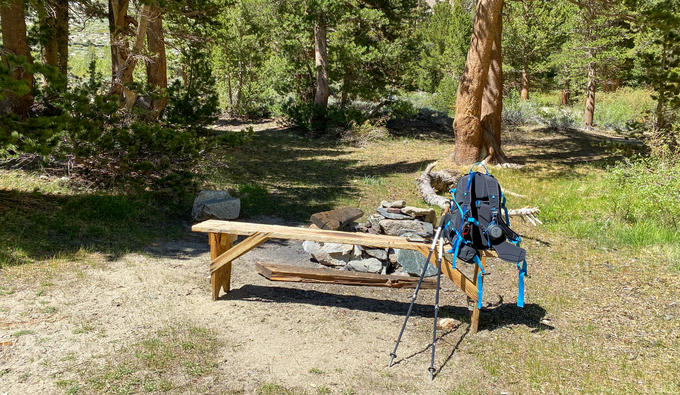 Including stopping for pictures, it took about 2 hours and 15 minutes to hike the 4.5 miles to the lake. Earlier at the trailhead, my new friend told me that the best views were up the old mining road that zig-zagged up to Hanging Valley, so I decided to follow his advice since it was only around 3pm. However, the wind was a lot stronger further up, and I realized that I forgot my jacket. I had no idea how much further up I had to go, and I didn’t want to be out on the trail without a jacket when the sun dipped below the mountains. I decided to abandon the ascent and turned around. I later checked the map when I got back to the car, and the hike up to Hanging Valley was only another 1.5 miles or so. In hindsight I wish I would have pushed through—oh well.

The hike back was a bit chillier with the wind picking up; as if the wind was taunting me for forgetting such a basic layer at the car. Near the end I passed four backpackers heading up towards the lake to camp for the night. They were the only other people I had seen on the trail all day.

I made it back to the 4Runner before 5pm and started backtracking Buttermilk Road to snag one of the camp sites I had passed on the way up to the trailhead. Here I had an amazing view of the surrounding mountains while enjoying another ramen dinner, my book, and some whiskey. The view was a little spoiled by the crazy winds blowing through camp, but I managed to enjoy it nonetheless. 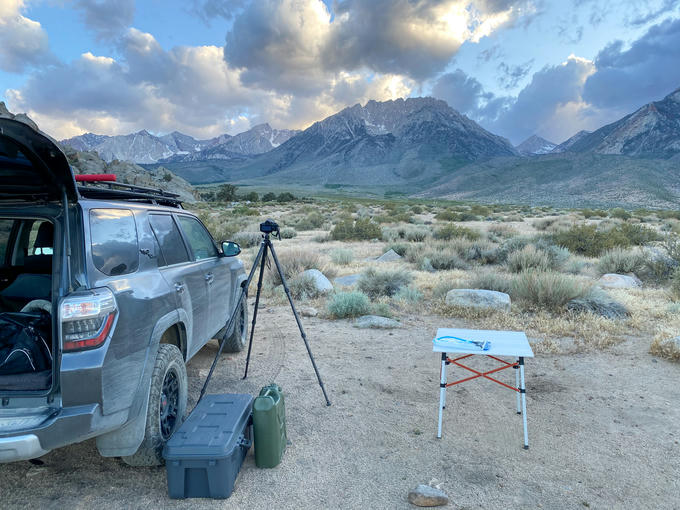 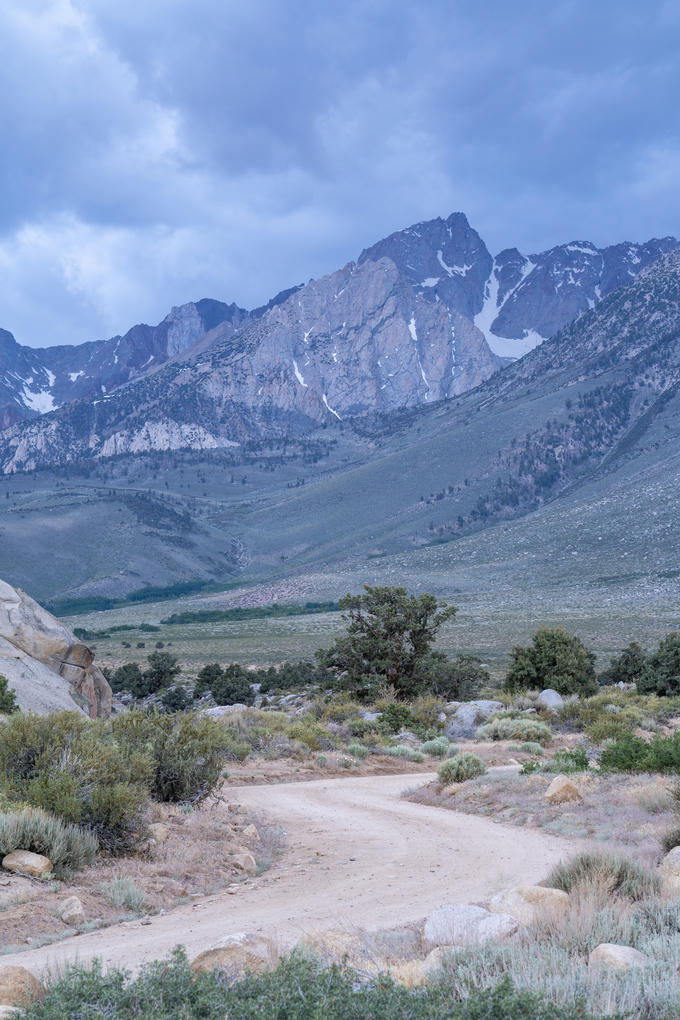 The night brought little sleep with all of wind blowing off of the nearby mountains, and I woke up early to try to capture some shots of the surrounding mountains in the sunrise. The light was kind of flat, and there was not a cloud in the sky, so that didn’t really pan out. I broke camp early, scarfed down a quick bowl of instant oatmeal and proceeded to check the third item off my list: off-roading.

I didn’t take any pictures on this part of the journey, but Buttermilk Road is a 15 mile “moderately” rated off-road trail. I bottom out a few times (oops) and hopped out to check my line in two spots, but I never used 4WD. Most of the area is active cattle land, and there were a few times where I had to encourage cows off the trail. The views of the surrounding Sierras were gorgeous. This is another place that I bet would be breathtaking in the autumn. Completing the loop took about an hour and a half. From here I got back on the highway and began the 6 hour journey back to the Bay Area. 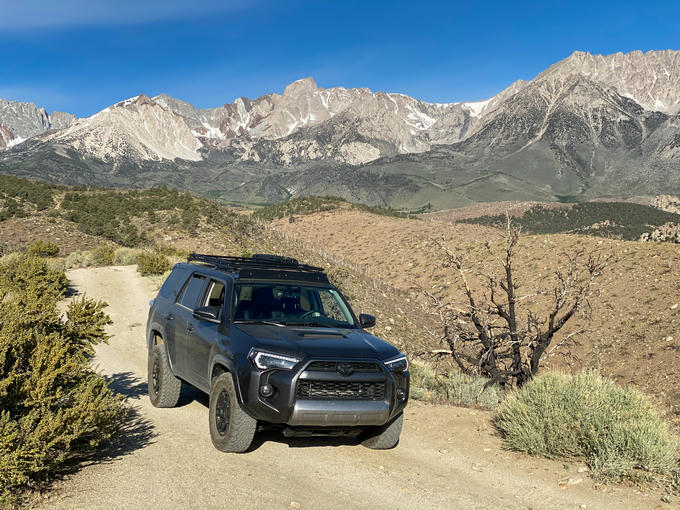 Wrapping up, it was a fun little adventure. I definitely want to return to this area, and I will prioritize hiking next time. Aspendell and Pine Creek Pass Trailhead both offer far more hiking opportunities than Horton Creek Trailhead without having to work as hard to reach it.