Note: What follows is a trip report for something I did several months ago. Now that I am trapped inside by the shelter in place orders I wish I had better documented my previous hikes and trips. So here I start with the fading memory of a short day out back in February.

After an unsatisfying snowshoeing trip to Snow Mountain East in the Snow Mountain Wilderness, I was itching to get back out again. I was deciding between a few locations in the Sierras and ultimately chose to hit Round Top from Carson Pass. Someday I’ll venture into Yosemite, but I hate leaving the pup at home!

Echo and I piled into the car around 6:30am and hit the road. I packed a lot of stuff. I had never visited a Sno-Park before, and I had this vague idea of having the place to myself to lounge around and camp out of the back of my car. I quickly realized this was a silly idea when we got to the Carson Pass Sno-Park—the place was packed. I barely managed to grab a parking spot.

After scarfing down a PB&J sandwich (and taking a group photo for a nice group of people), Echo and I hit the PCT shortly before 10:30am. Thankfully the trail was not as packed as the parking lot, and we quickly had the trail to ourselves. 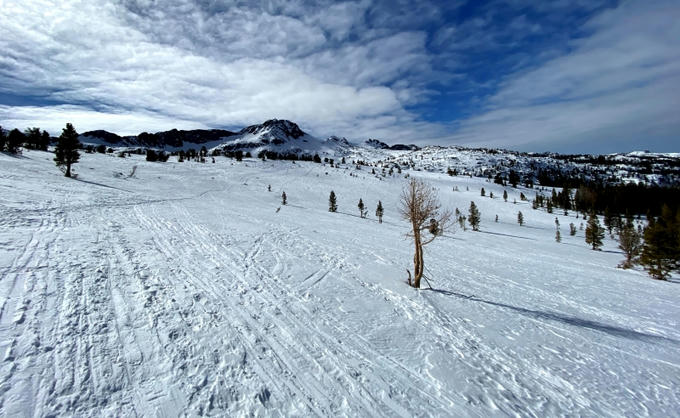 Round Top in the distance

The sun was shining, and the temperature was in the low 70s. It was a great day to be out on the slopes. The snow was still a bit icy and crunchy, but the sun was working on softening it. It wasn’t idyllic soft snow, but the densely packed glaze allowed for fast ’shoeing.

Sadly, we ran into a group and forest ranger searching for a lost dog. They weren’t around after we descended, so I hope they found their puppy.

We made good time and arrived near the summit just after noon. The final stretch to the summit looked like a rock scramble, and I didn’t want to force Echo up that. She had a hard enough time on the steep ascent up to the saddle between Round Top and The Sisters, so we called it good just shy of the peak. 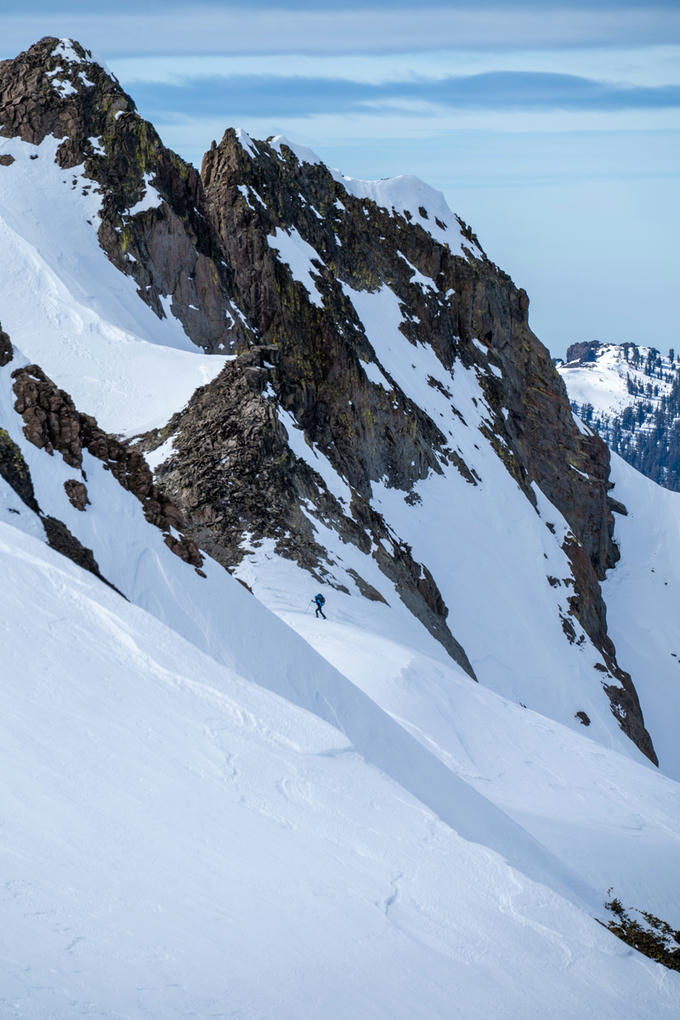 A skier ascending between The Sisters

View of the north from Round Top

We started our descent after enjoying the scenery and a snack—a Clif Bar for me and a Power Pup protein bar for Echo.

The slopes were more active on our way down. A handful of skiers were carving up the snow that was softening in the sunlight, and Winnemucca Lake had snowshoers scattered around it. I’ve done a lot of “resort skiing” before, but watching the skiers back there made me very interested in trying backcounty skiing some day. Maybe I can pick up a cheap pair after this season is over… 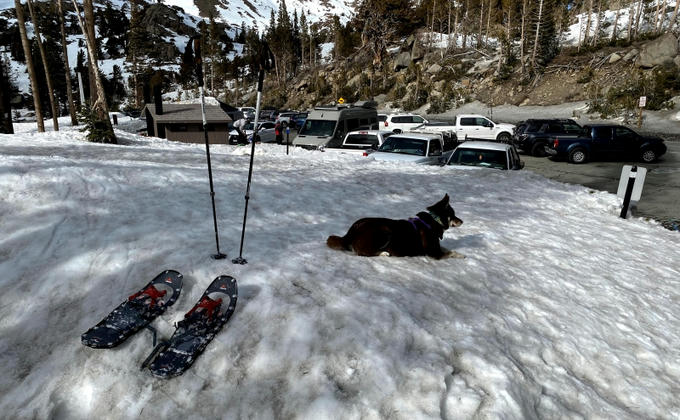 Echo waiting for me to take my snowshoes off

We made good time on the descent and arrived back at the Sno-Park around 2:30pm. All-in-all it was a great little adventure, and I really enjoyed it. The snow was nowhere near as soft as the stuff I generally snowshoe in Montana, but the wet packed snow was very easy to cruise over, and the Sierras are always beautiful.

My biggest issue with this trip was how far it was from home; I spent 6.5 hours on the road for 4 hours on the slopes. This trip has me strongly considering selling the 4Runner and getting something I can camp in. A 6.5 hour drive doesn’t sound so bad if I can spend the weekend out there. Perhaps a campervan or a pickup with a slide-in camper? An FWC Hawk looks really nice…

If you’re looking for a short day-hike in the area, I definitely recommend checking out Round Top.